Peter Weibel, director of the Center for Art and Media in Karlsruhe (ZKM), makes the following prediction: “Today we applaud the robots. In thirty years, the robots will applaud us.” The trinational Stage Your City project was designed to overcome this binary contrast. It is not ‘man versus machine’, but analogue performance combined with creatively implemented digital technology, which allows for instant interaction, that is being tested as a variant of the theatre of the future.

There is no doubt that we are already digitising all areas of life: television is only digital; self-learning algorithms suggest news stories, films, songs and friends to us on social media; artificial intelligence will soon control self-driving cars. Many people touch their smartphone more often than their partner. Your device knows you better than a friend, an authority: every preference, every movement, every fingerprint is registered and evaluated. Until now the order in auditoriums and theatres has been, “Please switch off your smartphones!” But isn’t theatre – as the pure and final oasis of analogue – closed to a technical development that has long since become a social development? Where would the theatre be today if the Romans had said, “No machines on the stage!” or the people of the Baroque had said, “No backdrops!”; if the visitors of 1880 had said, “No electric lighting!” or the spectators of the 1990s had said, “No video please!” Up to now, theatre has virtuously added every technique to its range of means of expression, without neglecting the essential: the people on stage. So we must ask ourselves: How can digital processes be used artistically? How can the role of the audience be expanded digitally?

These questions were the starting point of Stage Your City – a European Theatre Lab project headed by the European Theatre Convention. ETC had submitted several funding applications to the EU to develop forms of a theatre of the future. Only applications that listed ‘digital’ as a keyword were successful. Theatre people from Nancy, Tbilisi and Karlsruhe developed the dramaturgy for a digital/analogue, multiperspective tour of the city of the future in several OpenLabs at the Médiathèque Manufacture Nancy, the Ars Electronica Center in Linz and the ZKM Center for Art and Media in Karlsruhe. The texts were written by the Lasha Bugadze, Marie Dilasser, Frédéric Sonntag and Konstantin Küspert. 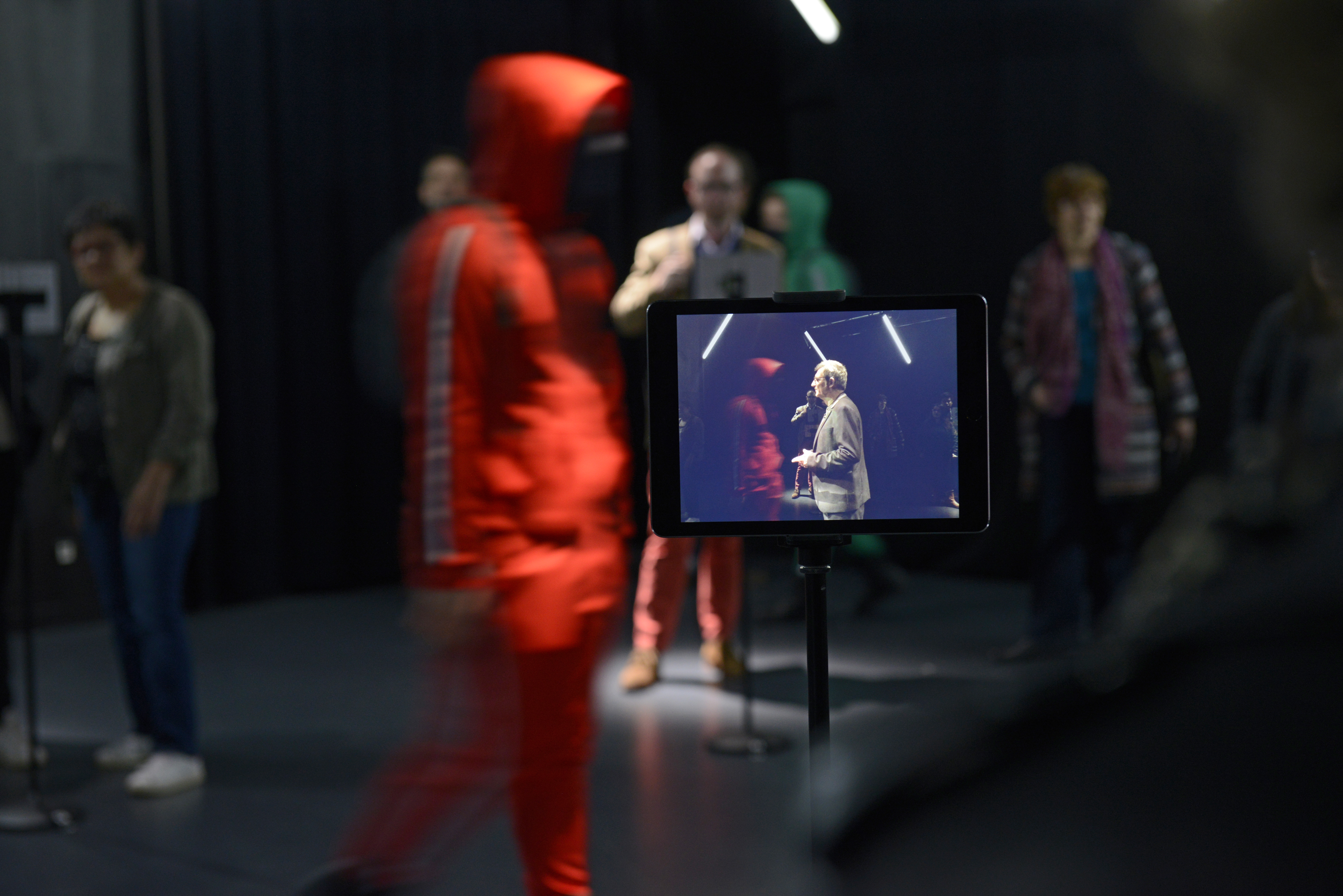 Stage Your City ©Eric Didym
The audience meets in a black box and encounters four experts from 2052, each of whom represents a moral challenge for the next thirty years: love in times of total simulation, immortality through medical technology, identity without historical memory, security through total surveillance.

Guided by an app and divided into four groups of twelve people each, the audience comes to four stations in succession. On the way, the experts use audio commentary to delve even deeper into their problem; this soundtrack transforms the city and its inhabitants into a future dystopian backdrop.

At four stations (a gate, a café, a library and a doctor’s surgery) at each venue, the audience gets together with virtual and/or real actors and is encouraged to interact. They send a photo, a selfie, a personal love song and a short text via the app to the net.

Back in the black box of the theatre the audience gets to meet themselves. The pictures they sent appear in a 360-degree film accompanied by a mix of the love songs. In the end, there is a real person – a little girl – as the embodiment of the master gives the people of the future love, immortality, identity and security.

When selecting the digital techniques that the trinational team wanted to acquire artistically, it followed the advice of Gerfried Stocker, the artistic director of the Ars Electronica Center: to offer all visitors a valid experience, not just rely on one technology, take technical problems into account, and not become dependent on a solution. Many projects rely on a single technique and use it to its full potential. We preferred to experiment with many new technologies and test possible artistic applications. The focus is not on technology, but on the history of the common migration into the future of the cities. 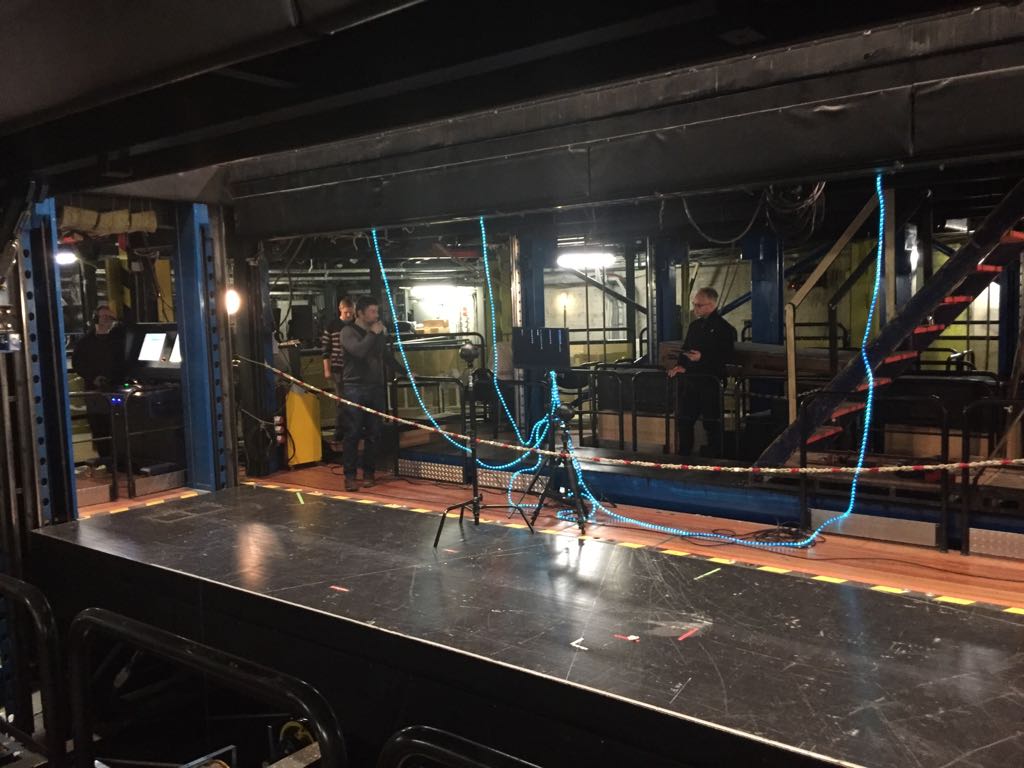 360-degree film shooting, Karlsruhe
A 360-degree film on the project page www.zigmagora.eu introduces the audience to the topic and invites them to download the app. The technical rooms of the Karlsruhe State Theatre serve as a futuristic backdrop. Many viewers experience the amazing possibilities of their smartphone for the first time: the picture follows the movement of the smartphone up, down and in all directions.

The four experts from the future introduce themselves in an installation by media artist Chris Ziegler: eight iPads on stands are arranged in a circle and use overlay technology to suggest to the standing or moving viewer inside that someone is talking to them. The virtual actors in the city only become visible to those who hold their smartphones on a poster with a hidden code. Using this augmented reality technique, the actors can play with themselves or colleagues who were filmed previously.

For the final picture, a programme developed by Bernd Lintermann of the ZKM puts together the pictures produced by the audience into a three-dimensional sphere inside, which can be experienced with the help of a simple cardboard attachment for the smartphone. The audience thus experience their own city in a new way, discuss problems of technical progress and have experiences with the theatrical use of digital technologies that most of us have never experienced or used before – they can thus get involved in two senses. This too is ‘Volkstheater’ in Karlsruhe: the digital empowerment of the audience to participate.