For me, as a director, it is important that the artistic idea and concept emerge from the story being told. Therefore, I approached this project with scepticism and curiosity: Which technological instruments might bolster the artistic concept? And in what ways? I see theatre as an analogue room in which the members of the audience turn off their mobile phones and sit together concentrating on what is happening onstage. Theatre is and has always been ‘old-fashioned’ in its form of communication. And yet, this does not mean that theatre is non-technological or uninterested in technological tools. On the contrary, theatre has always embraced different technological solutions: electricity, light technology, video usage, digital stage machinery and sound technology are all examples of that. When we decided to establish a partnership with Croatia that would result in two fully substantial repertory performances, it became all the more important for us to base the project on the original texts and narratives told.

Although I was personally unable to attend all the different meetings and conferences in Europe, it was important that the theatre be represented there. Gatherings, meetings and brainstorming sessions were held at the theatre with representatives from the different departments. Just as the ETC conferences partnered artists and technological experts, we tried to do the same thing at the theatre. This resulted in close co-operations between the dramaturgy section and the sound department, which in turn led to a number of exciting and innovative ideas. The theatre thus expanded its “toolbox” for future performances. This cross-departmental way of working is one of the things we want to continue. 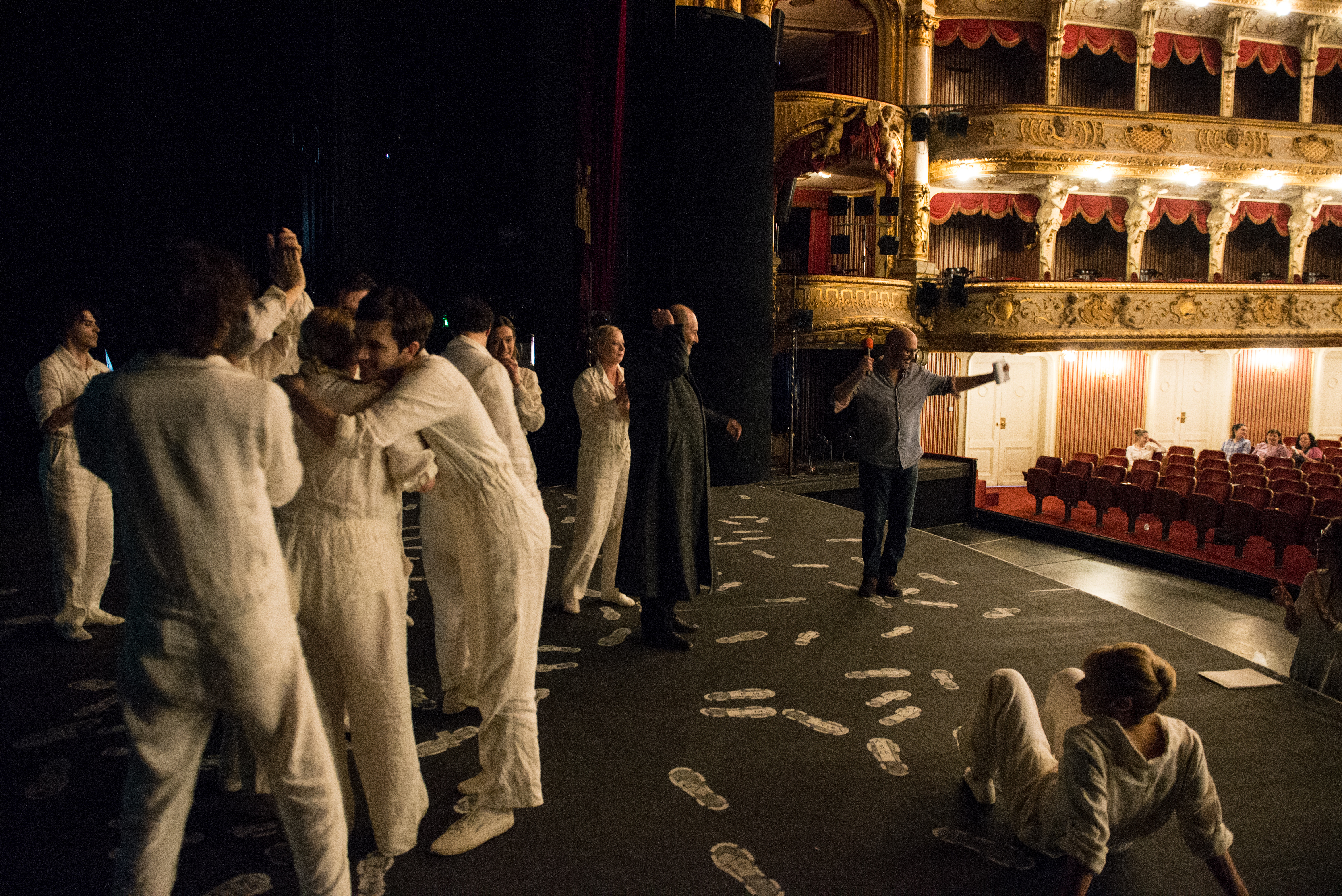 In Peer Gynt, I chose to integrate and use motion sensors, which can very precisely bring sound effects and sound costumes to life. In this respect, it is important that the actors control these themselves. It frees the actor from having to follow the sound technician’s timing, and it gives the actor bodily agency. In Peer Gynt, we used five sensors, and these were used, for example, in a situation where an actor chopped down a tree. Dovregubben used sensors to shake a mountain and Bøygen’s sound costume emitted a vital sound effect with each movement.

The focus on sound technology parallel to the development of the artistic concept also brought about several other exciting ideas, among them a hand-controlled projector – a device we were unable to realise or develop any further, though video mapping became an important part of Peer Gynt. I have seen this myself several times but have not actively worked with it. The idea was that Peer’s face would be projected onto the stomachs of the other actors who were playing his life. Furthermore, we used video mapping as an artistic effect to project illusions and create the effect of a life passing through a river of memories. We made significant advances in this area, but we want to continue developing it for the Peer Gynt performance at Det Norske Teatret in autumn 2018.

For me, it has been exciting to see how actors can have control over some of the sound effects. It has been instrumental in shaping the characters and giving them a higher status. This can be clearly seen in the actors’ posture and movements. Their patterns of movement are assigned a clear function in the composite visual performance. Another important lesson learned in the process is that the theatre has been directed toward an environment with which we normally do not have contact. These were drawn into the artistic process early on. It has been an exciting and very inspiring experience.

This project brought together two large scale stage productions of modern classics, Peer Gynt by Henrik Ibsen and Kraljevo (The King’s Fair) by Miroslaw Krleža. they have been staged in the partnering theatres exchanging directors and bringing a part of their cultural heritage to the other country. Erik Ulfsby has directed the norwegian play in Zagreb, Ivica Buljan the Croatian text in oslo. Both productions work with the same composer and experiment with new audio technology, such as sound capturing, 3D sound, auralisation and psycho-acoustic effects. More about this creative project…