Kinetics of Sound takes its starting point in an ordinary theatre exchange programme in which two modern classics, Peer Gynt by Henrik Ibsen and Kraljevo (Danish: Den Siste Kongsfesten; English: The King’s Fair) by Miroslaw Krleza, are staged as ordinary theatrical productions within the respective repertoires of the theatres. Erik Ulfsby, artistic director at Det Norske Teatret, produces Peer Gynt in Zagreb, while Ivica Buljan, theatre department director at the Croatian National Theatre, stages Den Siste Kongsfesten in Oslo. Both texts were chosen because they feature parallel universes, dream worlds and distorted perceptions of reality, and their decisive narrative techniques make them worthy of investigation and readily transferable into a digital context. The project intended to explore theatre’s opportunities of working dramaturgically with sound and new audio technology, such as 3D sound, auralisation and psychoacoustic effects. The project partners have looked into the field of live electronic music with music academies in Oslo and Zagreb and have worked together with SINTEF’s Acoustic Research Center (ARC) in Trondheim, Norway. With more than thirty students involved, the Department of Sound and Music of the University of Trondheim (NTNU) is an important partner in the research and development of new audio and visual techniques, tools and equipment that serve the artistic purposes of communicating between the stage and audience.

Krleža’s play The King’s Fair is set at a large fair during the celebration of King’s Day on the eve of the First World War. It is full of noise and music. The interweaving sounds of different characters can be heard on stage: the seller, pub owner, circus artists, petty bourgeoisie, prostitutes; Italians, Chinese, Africans. The main character, Janez, has hanged himself because the desperate love for his girlfriend Anka was unrequited. Still walking among the living, he challenges Anka’s new boyfriend to a duel. In an ecstatic death dance created around them, Janez dies for the second time at dawn.

The King’s Fair is considered the first expressionist drama in Europe. The play, written in 1915, demanded extremely experimental stage procedures. These procedures are described in detail with ample stage directions, including sound and light effects, scenes with masses and highly engaged political discourse. Treated as a musical score, they create a synthesis based on language, sounds, visual elements and dance. The acoustic experience is an individual one for everybody in the audience.

Henrik Ibsen’s Peer Gynt delves into the parallel world of Nordic mythology, replete with trolls and vast fjord landscapes. In the fifth act, when Peer returns to Norway after thirty years and must fight for his soul, the production uses different audio devices to explore the psychological, mythological and dramatic texture of the play. From the start of the project, it was crucial for the two theatre directors to allow both the stories themselves and the dictates of theatre to pick which technological instruments to use. The theatres were not interested in pushing technological solutions that, in the worst-case scenario, would appear forced in the final performances. 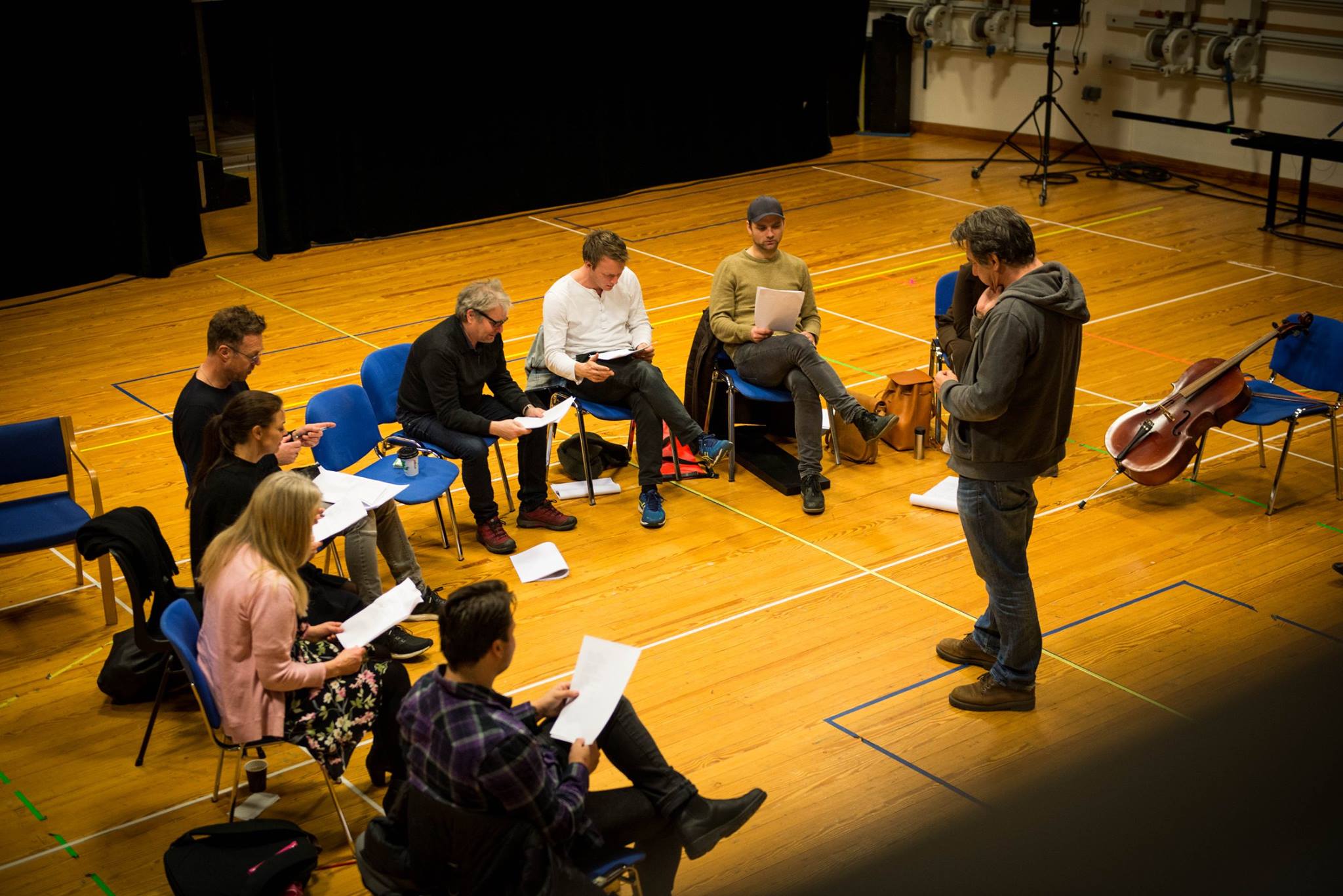 At Det Norske Teatret, we set up a working group consisting of sound department head Simen Scharning, dramaturgy department head Carl Morten Amundsen and dramaturge Anders Hasmo. One of the ETC’s project stipulations was that each country had to make contact with national research institutions. Det Norske Teatret got in touch with the music technology community at NTNU and talked with professor Sigurd Saue concerning ways to develop technological sound features for the two theatrical concepts.

NTNU thought the project might make for a useful case study in teaching bachelor’s students of music technology. Sigurd Saue taught the students about various music and sound technologies and connected sound artist Amund Ulvestad with the student group. The theatres’ dramaturges had an initial meeting with the students when the project was presented. Furthermore, the thirty students were divided into two groups and lectured on the texts of the plays. Most students were familiar with Peer Gynt, whereas they were unacquainted with Kraljevo. In both cases, the students acquired new insight into the plays, heard a dramaturgical analysis and immersed themselves in the texts. Then, over a period of six weeks, the students worked on the cases in small groups under the supervision of Saue and Ulvestad. This was followed by presentations for the theatre’s working group, featuring twelve different sound-tech projects. Sensor technology was prevalent, but there were also projects involving directionally controlled sound, 3D sound, laser sound, etc. All the students received feedback and reflected on technology, content and artistic possibilities. Based on the various concepts presented by the students, DNT chose the ones that were deemed most relevant and, in addition, those that seemed technically feasible. Saue was then assigned the task of developing demos that could be tested in an OpenLab in Oslo.

In October 2017, Det Norske Teatret conducted an OpenLab with Erik Ulfsby (director of Peer Gynt), Ivica Buljan (director of Kraljevo), Mitja Smrekar (composer for both projects), Amundsen, Scharning, Hasmo and the actors in Kraljevo, who, alongside Saue, tried out the demos. Most of these involved sensors and triggers with various sound materials. It was interesting to observe how the actors reacted to the technology, and how initial scepticism quickly gave way to playfulness and movement. This was also an important meeting for the two directors. After the OpenLab, Erik Ulfsby agreed to use sensors in Peer Gynt, which also proved to be the best option for Ivica Buljan. The theatre then tasked Amund Ulvestad with developing the sensors for the theatre.

An OpenLab was also held in Zagreb, comprising a lecture on sound technology and an opportunity for the audience to play with sound from various objects.

This project brought together two large scale stage productions of modern classics, Peer Gynt by Henrik Ibsen and Kraljevo (The King’s Fair) by Miroslaw Krleža. they have been staged in the partnering theatres exchanging directors and bringing a part of their cultural heritage to the other country. Erik Ulfsby has directed the norwegian play in Zagreb, Ivica Buljan the Croatian text in oslo. Both productions work with the same composer and experiment with new audio technology, such as sound capturing, 3D sound, auralisation and psycho-acoustic effects. More about this creative project…