Virtual reality has been a trending topic for quite a while. Headsets and cardboards for smartphones have been just as en vogue as entire virtual reality arcade machines.

Like quite a few technological inventions, virtual reality has its basic roots in the arts. Painters  already tried to give viewers an idea of what it would feel like to be part of a specific scene on the canvas. 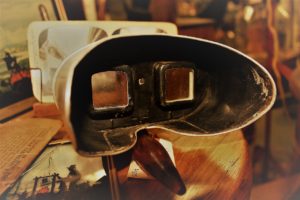 In 1838, English scientist Charles Wheatstone already experimented with showing viewers images side by side through a stereoscope. Stereoscopes allowed for a three-dimensional view of images and became much more common in the early 20th century.

The author Stanley G. Weinbaum also thought of a device that consists of a pair of goggles allowing the viewer to immerse into a kind of virtual reality. This was in the 1930s, so Mr. Weinbaum must have had quite some fantasy that went beyond the medium film that became so popular at that time.

Morton Heilig is another influential person in regard to VR and its development. In the 1950s, he already thought of a so called ‘Experience Theatre’, which would address all human senses. But Mr. Heilig was not only a theorist; he also created a machine which was christened as Sensorama (https://en.wikipedia.org/wiki/Sensorama), the prototype was finished in 1962. He also invented the Telesphere Mask (http://www.mortonheilig.com/InventorVR.html), which can be seen as an early version of an HMD (head-mounted display).

In the year 1968, Ivan Sutherland, together with his student Bob Sproull, created the first virtual reality devices that were mounted to the head. Unlike modern virtual reality glasses, this early edition was very heavy and could not just be strapped to the head, but was suspended from the ceiling, which explains the unusual name for this device: Sword of Damocles.

Interestingly, the term virtual reality was not coined until the year 1987. Jaron Lanier, who founded the visual programming lab (abbreviated as VPL), is attributed with bringing it to the mainstream. The late 80’s and early to mid 90’s saw quite a few VR devices, with video game giants SEGA (a VR headset for the Sega Genesis) and Nintendo (with the Virtual Boy, a video game system that only came out in North America and Japan, with rather limited commercial success) releasing systems based on said technology.

In the 21st century, massive technological improvements have allowed the technology to flourish extremely. Well known systems these days are the Oculus Rift, the HTC Vive, the Samsung Gear VR, the Playstation VR and many more.

Now, what does all of this have to do with theatres and how can cultural institutions and performing art centres use VR to offer users an exciting experience? There are a number of interesting cases available.

The Royal Shakespeare Company has partnered up with Intel for instance. Director Gregory Doran wanted to turn The Tempest into a one of a kind visual experience. They worked with Intel for over 2 years to bring a virtual character on stage. An actor was outfitted with a motion captor suite and his movements recorded for many different characters. The outcome is very spectacular; see for yourself: https://www.youtube.com/watch?v=1GH1KNNvv4w.

59 productions, a company that has won a few Tony Awards, used virtual reality to advertise My Name is Peter Stilmann, an adaptation of City of Glass by Paul Auster. The plot of the play lends itself to VR, because it deals with different realities. So, it made sense to set up a booth in the foyer of a Manchester theater, where people could immerse themselves into the narrative of the play.

Across the pond, in New York City, a young adjunct professor at NYU Tandon School of Engineering by the name of Javier Molina came up with an unusual VR performance of Hamlet. The play is based on Janet Murray’s book Hamlet on the Holodeck: The Future of Narrative in Cyberspace. Murray holds the theory that ‘storytelling evolves alongside new technology’.

Theatre always has been an early adopter of new technology, and we very naturally enjoy the extended possibilities of storytelling that video, to name the most common, brought to the stage. In the same way, VR and AR should be tested and examined instead of ignored or feared. Hamlet will not lose his power to touch our minds and hearts – and probably he will do it much more intensively.